The agreements, with total contract value exceeding 4.9 billion yuan ($708 million), were signed at a Seminar of UAV Creative Development during the ongoing 12th Airshow China.

The Zhuhai additions will promote industrial-grade UAV growth in the only park of its kind in Guangdong Province. The park has added another 20 sq km (7.7 sq miles) of tract for drone test flights, which meets airspace requirements for UAVs after R&D and training.

For example, Harwar International Aviation Technology (Shenzhen) has designated in the Jinwan park 53,000 sq m (13 acres) and 400 million yuan ($57.8 million) for R&D of drones for military and police use. Estimated is annual output of 500 million yuan ($72.3 million). 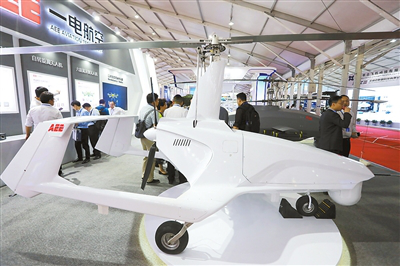 In addition, Chengdu Jouav Automation Tech is investing 200 million yuan ($29 million) to develop a vertical and horizontal drone in the park. It will have a land area of 25,000 sq m (6.12 acres) and estimated annual output value of 320 million yuan ($48 million). Jouav designs and manufactures professional and military standard autopilots for commercial UAVs.

Furthermore, a 150-million-yuan ($22-million) laboratory for police investigation drones, security robots, and other intelligent equipment lab will enter the aviation park. The laboratory will serve as the Testing Center for Quality of Special Police Equipment under the Ministry of Public Security.

The signings took place at Airshow China, which is being held from Nov 6 to 11 in Jinwan District where the aviation park also is located.